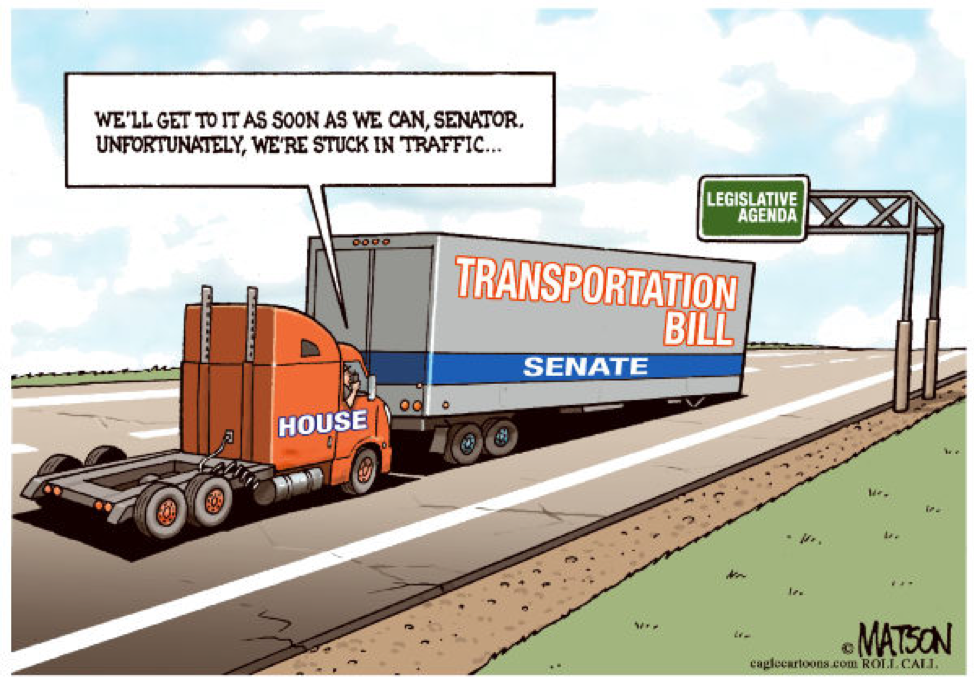 After some feedback from our readers and rethinking our last post about it we changed our solution. I think if a transportation bill was done like this it would get passed.  The key to this bill is more jobs for the American people and better tax credits for some investors.  And folks, here’s how we do it.

A $2 trillion transportation bill HALF funded by the private sector.

The private sector will fund $1 trillion of the cost because in return they get a 10% tax credit and 3% tax free return on their money.  BUT, this money can only be used for toll bridges and toll roads.  After ten years the projects will be paid for and the toll charges will go away.

That’s how the money will come in very easily over approximately ten years as needed and it’s little enough that it won’t hurt Wall Street.  Think about the economic trickle-down effect. It would be ENORMOUS.  And it could happen much faster because some of those projects are all ready and waiting.

In fact, Wall Street can sell the bonds.  Only it’s just going to cost more if they do.  I’d rather the Treasury did it, and then the collection of the money would be by state.

The other half will be government funded.  This $1 trillion will be allocated to road improvements.

If the bill approved $1 trillion dollars funded at $100 billion a year over ten years. Think about it.  Stipulate that it could be cancelled at any time by any administration, but with a one-year notice. This gives the states at least a 2-year commitment for planning purposes and winding down. So, you are only guaranteeing $200 billion over 2 years doing $100 billion a year. If the program is successful you continue it for the 10 years.

This would add 50,000 union level jobs and 20% of all this will come back to the government in income and corporate income taxes. You know there are people waiting to fill potholes and fix and repave the roads.  It would be a real boom for the economy.  I think we’re talking 50,000 to 100,000 in jobs right now and it would be at little cost.

We need to do it now, it’s costing us now, and will cost us more later.

We need to talk about who’s really paying for things.

I know of 10 bridges that are engineered and ready to be built.  The problem is funding. The states have to pay for all the engineering and design work because that’s where we, the federal tax payers and the federal government get screwed.  States take a major portion of the budget allocated for design and entitlements for their transportation requests and put it into their general fund where it ends up getting spent on something else.  They figure out ways to sneak it in there.  This will keep them from being frivolous with the federal tax payers money.

I’ve heard too many senators say well my money, our money, the federal government’s money.  None of it is their money.  It’s all taxpayer money.

Within this bill we need to have a law that says all state gas taxes have to be used to fix and repair roads only.

A lot of state gas taxes are being put into the general fund. That should never be allowed and that needs to be stopped.  The minute you stop that, you’re going to redivert possibly $50 billion a year back into fixing roads because a lot of these taxes say one thing and they’re used for another.

I think this would pass, but you have to take it to the people first.

Do not take it to Congress because they, the “lawyers”, don’t know how to sell it.  They don’t know how to ask for it, but the people do.  The people are the ones that are going to pay for it. I can tell you there’s no rich person that I know of who wouldn’t pay more taxes today if they felt that we would have a balanced budget number and/or knew their money wasn’t being wasted. I’d just say we have to have a balanced budget like Clinton did.

We did it under Clinton.  Why can’t we do it under Trump?  Or whoever replaces him?

Our General Services Administration and our economists are so off base and so off tune mainly because they influence facts and figures based on their party influence, but more importantly they have bad assumptions in their economic analysis.

There is no question about that. They’re using economic algorithms and analyses that are so archaic it’s ridiculous.  I am an economist by education and I’m a political strategist wannabe. I get all that, and I’m a Democrat, but I know that this is a bill that could pass.

I would love to help with this.  It would be so easy to come up with a mathematically palatable thing to the people. I would have a major press release and I would have all the Republicans and Democrats that would go along with it, in the room.

But first, have the people weigh in.

I wouldn’t do any of it until the people weigh in and then conduct a decent poll.  The poll would not be done by the government because the government polls are too partisan, too expensive and too wasteful.  Have it done by the private sector and it’ll get done fast.  The federal government would take six months.

If you got a poll that says 75% of the people are for this Congress is going to have a very hard time not passing it.

Can you tell I’m hoping that Trump will start talking more about privatizing parts of the government?  I have some great ideas on how he could do that and save money for the taxpayer and give them much better security and service.

Again, we only need $50 billion total to start all of this.  The private sector would be totally self-funded to include all administrative fees.

Total Immigration Reform That’s A Win-Win For All 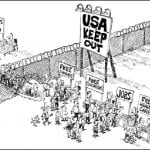 A Message to Attorney General Barr 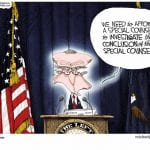