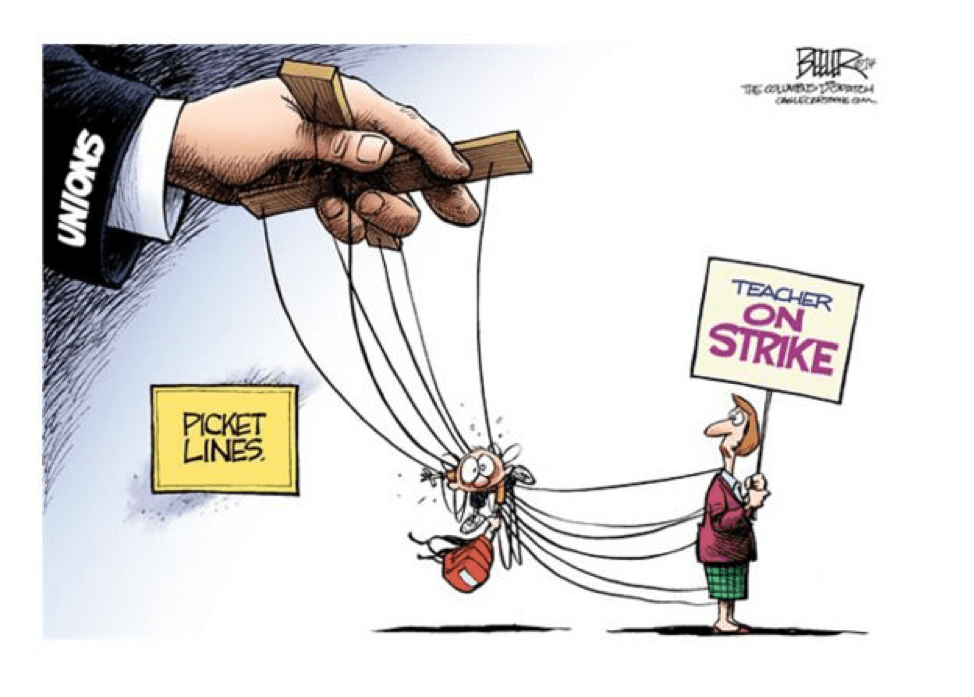 GOLIATH in this case IS NOT WHO YOU THINK HE IS

It’s a Group of Bad Actors

As you know, we’ve written various articles about how we totally believe in organized labor for government, and especially teachers and large corporations, and still do, but believe they should be run by an elected official on a voluntary basis.  It should only be hiring experts like lawyers and accountants, and the President is an honor job which is actually an unpaid job (they may get paid one day a week by their employer to do representation work) other than expenses.

The reason for this is to keep the corruption out of organized labor. Goliath, a book written by Rebecca Fredricks, God bless her for the brave woman she is, exposes the unions for what they are. What she did for all teachers is a must read for anybody, but it’s a real must read for everyone who has children, grandchildren, nieces, nephews, whoever have been parents, or on school boards, and school teachers for sure. It really shows how corrupt unions and government unions, especially teachers’ unions, are and how three quarters of their money goes to the Democratic party.

They truly are fundraisers for the Democratic party.

The union is trying to promote transgenders and manipulate the minds of our children rather than just taking care of the pay and the needs of the teachers.  They have gone too far.  The worst part about them is they protect the bad teachers and the bad actors.  About 80% of the teachers want the bad teachers gone.  That’s why I think tenure really should be legislated away.  It never was intended to apply to grade school and high school teachers.  It shouldn’t apply to college teachers anymore either.

We have so many other laws that cover the rights of teachers and people.  If they want to be a communist to be a college professor, you can do that.  We don’t care.  In the old days you couldn’t be a communist member, so they put tenure in, so you couldn’t fire them.  Now you can be a member of about anything and still be a teacher.  Tenure really needs to be done away with.

Seniority is another issue that should be dealt with.

I get that a teacher can get burned out after 10 years, but after 20-25 years they are far more apt to burn out.  This isn’t to say that many of the senior teachers aren’t loaded with a wealth of knowledge and experience that is invaluable. But there are many with a bad attitude that are doing a disservice to their students and are holding back the newer teachers out there.  Sadly, you can’t fire the bad teachers and that just destroys the morale for the rest.

It is the same with the police unions.  It’s just not right when you’ve got bad policemen, drug users, felons, people who have done things wrong and they’re still at their jobs and you’re expected to work with them.  Blue lives matter to me.  Teacher’s lives matter to me.  Black lives matter to me.  But not the Black Lives Matter movement.  They don’t stand for Black lives.  They stand for hating cops. Sadly, that’s what they believe. I ask you how many meetings have they had with police chiefs around the country to improve their situation? Instead they choose to be a negative divider rather than promoting positive resolutions.

This book by Rebecca Fredricks is a great insight to one part of the teacher’s union and the bravery of this woman taking that all the way to the Supreme Court.

She would’ve won it, if it had not been for Justice Scalia dying before they handed down the decision. But she teed it up well for her followers to get the Supreme Court to pass a “you don’t have to belong to any union law” two years later. The first vote was four to four, so the union got to stay.  That was for the California union. 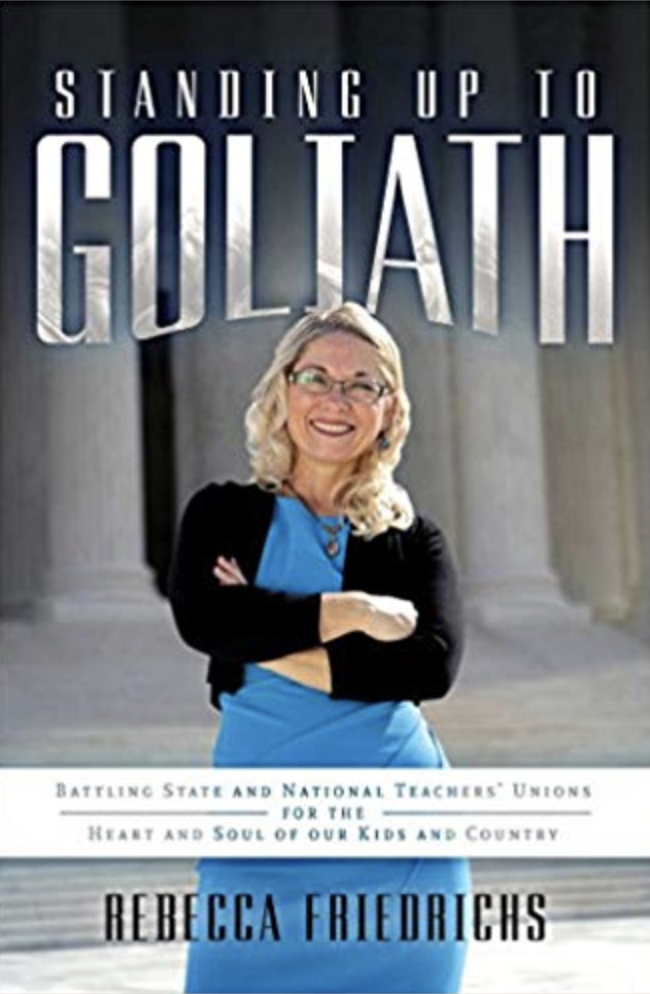 The story she tells is so thought provoking on what the real problem is. The general public really doesn’t realize that the mob mentality still controls the unions.  The only difference is they don’t call it the mob anymore.  They call it the union. Frankly I don’t know that everybody is really overpaid in the union.  It costs $400,000 to $500,000 for running their huge budget. A budget they shouldn’t have especially when three quarters of it is for politics and campaigning against things that have nothing to do with teachers or students.

They’re ruining our education system by going against the students and they’re definitely going against the teachers.  They’re in it for the money that they can collect and then turn around and get the politicians to protect their racket.

If I was a politician that took money from the teacher’s union after reading this book, I’d be ashamed. I wouldn’t take money from them anymore and I think that this is something that needs to be discussed at a higher level.  The press needs to do some serious investigative reporting. But because the unions control them through there large advertising and lobbying it’ll never happen.

We don’t need to be indoctrinating our children with transgenderism and all those things.

People, for the most part, are fine with it. It’s only the people that want to get notoriety that keep promoting it.  As long as you’re not hurting someone else, most Americans don’t give a damn, what race you are, what gender you are, what gender you want to be, etc.  It’s when you start infringing on their rights that they care and saying you want a special this or a special that. All it does is promote victimology rather than empower people.

As you know, I hate the “R” word, meaning race.  I’d like to eliminate it, just like we eliminated the “N” word because I think the race issues in this country are so much better than it’s ever been.  Yes, we have further to go, but the bulk of what you hear about race is race baiting against Trump, who is the least racist person I can think of.  He’s doing more for the different races than any president in history.  The good news is the people know that and the more the media and the left bring it up the worse they look.  The racial activists ought to be ashamed of themselves.  They are making millions and millions of dollars doing nothing to better the situation.  They’re just complaining and bitching and blaming instead of coming up with workable solutions.

It works very well.  And it works with teachers.  Teachers are some of the humblest people I know. And let me tell you a little secret.  I happen to have a background in child psychology, even though I’m an economist by education.

If you have problems with your children and you can’t really understand what’s going on with them go to their teacher. There’s only one way this works.  You’ve got to be really honest with that teacher about what’s going on at home. Whether it’s a broken family, the dad’s an alcoholic, whatever it is, because the more information you can give the teacher the more they can help your child.

More importantly, that teacher is going to tell you what you should be doing to help your child and explain to you what’s going on.

That teacher very well may know more about what’s going on with your child than you do.  So, do not be afraid to ask because they’re with that child more than you are for the most part.  They want your child to succeed. They all do.

Now I know there are some that are just in it for the money and the pension, but I’d like to not believe that.  I’d love them to pay the teachers a lot more money today and maybe have a lighter pension later.  Why not allow them to get their homes paid for and enjoy life while they’re teaching and then have enough money to live on afterwards because they aren’t having to worry about the day to day financial stresses.

I don’t know any parent that doesn’t want the teachers taken care of and doesn’t respect how hard the teachers work.  It’s amazing how they try and blame teachers when the child isn’t doing well when many times it’s the parent’s fault as much as anybody’s.

But again, I highly recommend you read Goliath.

Any way you can help the cause she has put forward will make a difference.  The good news is, the laws have been passed and the teachers don’t have to belong to the union.  But the union still has way too much influence over teachers that quit and how terribly they are treated. This will change when a majority of the teachers don’t belong anymore. There’s a reason the unions are dying.  It’s because of bad management and greed.

I think that teachers ought to organize themselves.  Each state could have its own union.  One big union is not the answer.  One big bargaining group is not the answer because every state is different.  Every state has different incomes and economies.  Don’t call them unions. I think the word union has a very bad connotation to the general public.  But don’t forget, unions are a minority.  They’re one quarter of what they used to be and that’s because of their own mismanagement and greed.

They need to do the right thing and allow bad people to be fired and not ask for money for political purposes, and not have dollars that go elsewhere or support things that are not directly related to the students.

I’m a Conservative Democrat, as most of you know, and I am ashamed of the teachers’ union. But I still believe in helping people who can’t help themselves and they are the teachers right now.  They can’t help themselves because they’re not strong enough to fight their own union.  They’re own union is against them.  We should have been addressing this a long time ago.

Everyone needs to read the book Goliath.  And for any teachers reading this please don’t judge my writing skills.  I know their bad, but it’s important they everyone gets this message.

We Need To Eat The Babies 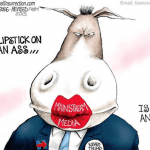 An Enlightening Opinion From A Millennial 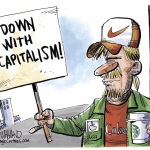